What is Special Education?

Note: This information is from our manual, Protecting the Educational Rights of Students with Disabilities in Public Schools

What is a disability?

A disability is an impairment that interferes with a child's ability to learn. In general, the term “child or student with a disability” is used to describe a child who has mental, physical, or emotional impairments that affect his or her ability to learn. To qualify for extra services in school, a student's impairment must also meet the definition of disability under special education laws.

Why do schools have to provide services for students with disabilities?

There are federal and state laws that protect the educational rights of students with disabilities. In 1973, the U.S. Congress passed Section 504 of the Rehabilitation Act, which made it illegal to discriminate against people with disabilities in programs receiving federal funds, such as public schools. Two years later, Congress passed the Education for all Handicapped Children Act. The federal law is reenacted every three years. It was most recently changed in 2004, and is now called IDEA or IDEIA (the Individuals with Disabilities Education Improvement Act). In this publication, we refer to the law as IDEA. In addition, in 1991, Congress passed the Americans with Disabilities Act, commonly referred to as the ADA. Title II of the ADA defines disability in the same manner as Section 504. When the ADA and Section 504 both apply, Section 504 is usually used because it has regulations that are more specific for schools. Section 504 and IDEA were enacted to ensure that students with disabilities would be provided with meaningful educational experiences.

What is the relationship between IDEA and Section 504?

Under both laws, school districts are required to provide disabled students with a free appropriate public education, referred to as FAPE. This means that districts must provide a range of services to meet the individual needs of students who have trouble succeeding in school because of a disability. Section 504 provides services for a broader group of students than does IDEA 2004 because it has a more expansive definition of “disability.” Therefore, if a student meets the eligibility requirements for IDEA, he or she is also eligible for the protections of Section 504. But not all students with disabilities who are entitled to Section 504 services are eligible for special education under IDEA. One way to think about the relationship of the two laws is to think of eligible students as smaller groups of students within a larger group. Below is a picture with a large circle representing all students. The medium-size circle inside the big circle represents the students who have disabilities and qualify for Section 504 services. Of that group, a smaller group is also qualified for services under IDEA. 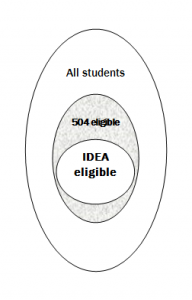 What is considered a disability under IDEA and Section 504?

Disability is defined differently under IDEA and Section 504.

IDEA provides services to children who fall within one or more of the following categories of disability and who need special education and related services to make academic progress. The categories are:

The state regulations (Washington Administrative Code or WAC) give definitions for each of these categories. Washington law also defines two additional categories of disability: deaf-blindness and multiple disabilities.

Why does this publication focus on the rights of students under IDEA?

This publication uses IDEA as a framework for discussing children's rights to special education and services because the rights under IDEA are more clearly defined. See Section IX of this publication for an outline of Section 504 rights.

What are accommodations and modifications?

Accommodations are different than modifications. While the Individuals with Disabilities Education Act (IDEA) and its regulations do not define accommodations or modifications, there is some general agreement as to what each is, as well as the difference(s) between the two: Accommodations are provided when the student is expected to reach the same level of proficiency as their non-disabled peers. An accommodation allows a student to complete the same assignment or test as other students, but with a change in the timing, formatting, setting, scheduling, response and/or in any significant way what the test or assignment measures. Examples of accommodations include a student who is blind taking a Braille version of a test or a student taking a test alone in a quiet room.

Examples of accommodations include a student who is blind taking a Braille version of a test or a student taking a test alone in a quiet room.